Bras That Start The Fire 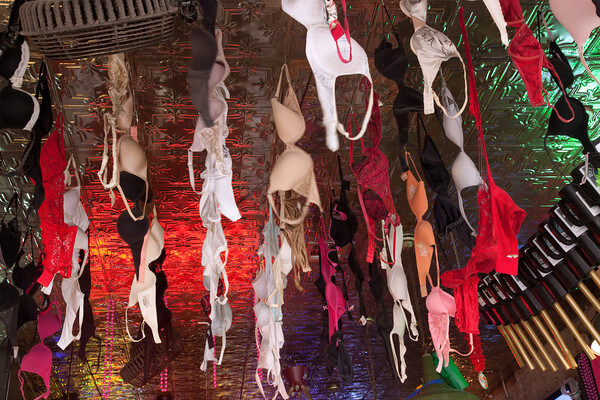 Have you visited the Holler House Bar? Share a commeant! Looking for a quirky new place to let loose and toss off your bra after a long day at work? That's right, head down to the Holler House Bar, whip off your bra and throw it up into the rafters. After facing a recent bra hanging ban from the city due to fire safety issues, the bar is back in bra hanging business. But, in the end, all's well that end's well, because according to the bar, the publicity that ensued from the ban has been great for their business.

For the past 45 years, Milwaukee's Holler House Bar has been adorning its establishmeant by hanging bras from the ceiling. A couple of months ago, however, the bar faced a harsh decree by a city inspector: no more bras. According to the city, the hanging undergarmeants were, apparently, a serious fire hazard. Facing fines of up to $10,000 a day if not removed, the bar reluctantly took down their beloved adornmeants.

Finally, after one month, the bra ban was lifted, or as the Holler House put it, "long story short, common sense prevailed." In order to celebrate, a massive re-installmeant party was thrown. The bar combined their big bra bash with raising funds and support for breast cancer. Those interested in hanging up a bra of their own first donated $5 towards breast cancer awareness. The bra hanging custom was first started by 87-year-old owner, Marcy Skowronski. During a night of drinking with the girls, she and her friends took off their brassieres and tossed them up onto the ceiling where they landed on a pair of skis. Since then, the tradition was established and the unique decorations have been part of the charm that define this one-of-a-kind bar.