Common Mistakes You Make When Buying a New Bra

There is never enough said about bra fitting. Despite more and more women become enlightened about the common mistakes they make while buying a new bra, there is still nearly 80% women that do not fully understand the problem. Are you ready? Grab the recently purchased underwire bra, put it on and let's check if indeed it fits how it should.

The bra with ideally picked band size should stay horizontal to the ground in both front and back. After a few rapid movements, check in the mirror if the back of the band rides up meeting rather your blades than the mid back part. If the bra band rides up, it is a clear sign that the bra band is chosen too big. A new bra needs to only be clasped on the last adjustment and while the bra is used and washed and stretches in the band area, you can start clasping on the middle and then the first adjustment. If you start clasping your bra on the tightest adjustment from day 1, guess what happens next. The bra is of no use after just 3 months as you receive less and less support. Bras worn with a band too loose will also cause turning bra underwires inward and irritating the breast bone incredibly. 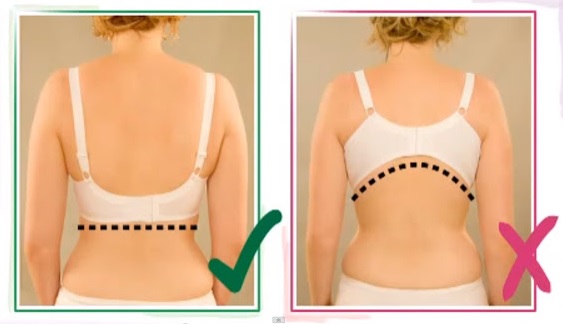 Mistake #2 The new bra straps are tightened too much

While the bra straps are important in holding the cup and positioning the bust, they under no circumstances should hold the breast weight! Check the bra right now for the straps digging in your shoulders. You probably don't have to see it anyway, as you can feel it day after day and that's why you hate your bra. The bra straps should only stretch by about 10% of its length, amen. All the lift and support comes from the bra band and a bra size. Trying to escape the pain in shoulder by slouching can not be healthy and surely is not the sexiest way to wear your bra. 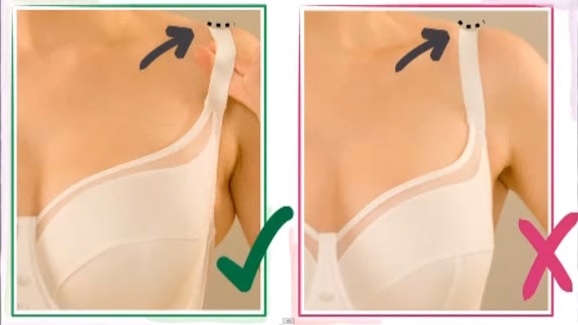 Mistake #3 Fill the gap up

Not always, but most of the time, when the bra back rides up as in Mistake #1, you can also notice the gap between the center bridge of the bra (the part between the cups) and your sternum. Its even worse if you can slide 2 fingers in and your girls are touching each other behind. Although with some plunge bra styles the touchyfeely looks good, the separation of even smallest breast will always look more attractive. Not only the center bridge that is hanging freely on top of your breast gives no support (the band is clearly sitting on your breasts and not under them), but you let the girls rub against each other causing redness, discomfort and irritation. Not to even mention the rubbing and scratching coming from the center bridge riding from the top, on top of it. This is the main reason you call some bras "scratchy" and blame the manufacturer - pick a tighter band, girl! 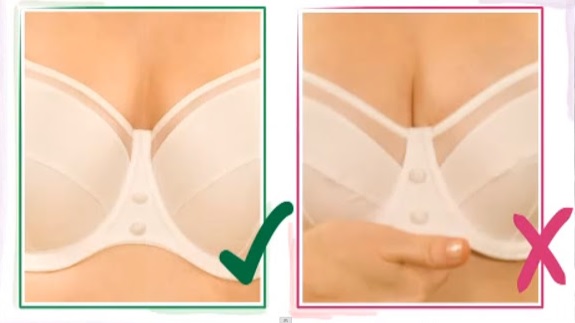 With the properly chosen bra cup there is no way some wrinkling of the unlined bra cup can happen, nor the gap between the lined cup and your breast. Before the final opinion on the cup size, check in the mirror if you see any thick body folds under the arms. THIS needs to be tucked in by scooping the actual breast tissue from sides inside the cup. It is your breast that you were leaving out of the cup. After this simple procedure it can turn out that the bra cup is actually too small. Here is the main reason you tend to say "I am too old for this pretty bra, look at my underarms". Now you know how to fix it . Get a bigger cup. Tuck the side boob in to fill the cup.Tuck the side boob in to fill the cup. 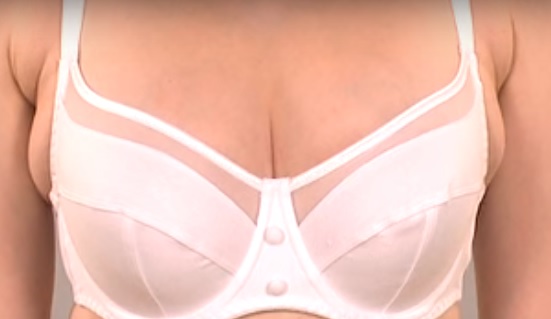 Mistake #5 A bra cup is too small

A bra that is too small can give you 2 problems which is four boobs. Either two extra on sides as seen in previous paragraph, or two over your natural boobs as seen below. None of them you desire and please admit that breast spillage is not sexy at all. If you want to show you do have boobs, shape them naturally with properly sized cups in lets say revealing bra style like a balconette in DDD size? Remember, the cups that are too small will most of the times also cause the middle part of underwires poking out through the shirt or poking in under the armpits. 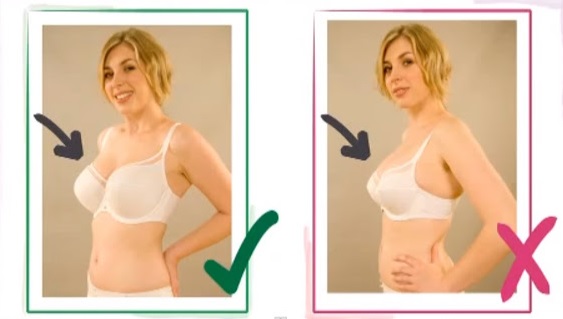 Many of you do not know that the "C" cup size is not universal, it is not of the same size with different band sizes. Let's say you bought a bra online, size 36D. After deciding that the band is too tight, doesn't let you breath, what do you exchange it for? 38D - wrong! Size 38D indeed will be looser in a band area, but the cup will also be bigger than the "D" in a 36D bra. You will see no lift, no fit and empty gaps -  with so much sorrow will you admit that this style is not for you. Remember: Anytime you switch a band size to a bigger one, reduce the cup size to keep the same cup size as it was. It goes two ways: every time you reduce the band size, pick a cup size with a letter higher than the previous one. Most common mistake women make in juggling the bra sizes is sticking to that one and only letter like it is glued to you forever. It is not, and accept the fact that instead of that 38C size you've been wearing uncomfortably, the 32H is your true size. Become familiar with a measure tape and a bra fitting chart and be flexible about the findings. I am sure you absolutely want to make that giant step from the 80% group of women who wear an incorrectly chosen size to a 20% group of happy bra shoppers.

There is no such thing as a $15 bra and being happy with a fit for a year. The reason cheap bras are cheap is because the fabric they are made from is cheap and over stretchable. If you need a bra just for one night, go ahead, but do not expect it to last after a wash. Bra fabric as any other fabric exposed to rubbing, temperature, soap, sweat, will change its qualities and the better fabric quality the more resistant the bra is to all these factors. The first and a crucial change in a cheap bra is a band becoming overstretched (that is loose) in just after a few wears. You will discover the need of clasping the bra on tightest adjustment just after a month to keep the bra tight and in place. Especially when it comes to buying full busted bras it may pay off to buy a bit more pricey bra of a respectable brand. These bras will hook you up with extra features like side boning for extra support, double stitching for keeping the parts intact, elastic fully adjustable straps for more comfort in the shoulder area. Especially if you don't like the padded look, the unlined bras are the perfect choice, but need to offer a flawless look without a manufacturer's error and the dye used for coloring that is safe to your skin (all bras made in Europe need to meet this requirement, unlike lingerie made in Asian countries).