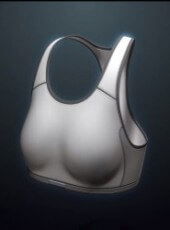 Breast cancer is the most common form of cancer in women. Early detection is the most important detail. First you need to know if you have breast cancer before you can begin the treatmeant and recovery process. Of course there is the mammogram, which is very uncomfortable, but it has about a 70% chance of letting you know if you are at a health risk. Wouldn't it be great if there was an easier way of detecting breast cancer in the earliest stage? According to Allie Compton for the Huffington Post, Lifeline Biotechnologies has developed a new way of detecting breast cancer. They have been working on this for the past 20 years. It is the First Warning Systems Bra.

It is given to you to wear at the doctor's office. The material is similar to a sports bra, and it has color-coded sensors that detect the breast temperature and any tissue abnormalities. This data is transferred to a computer for the doctor. The benefits of wearing a bra is the fact that it is easier and much more comfortable than having a mammogram. At this point, the First Warning System is detecting cancer at a 90% accuracy rate. First Warning Systems claims this type of testing will reduce false positive readings which are currently at a 50-60% occurrence rate in mammograms.

There are many more studies to do, in order to see if the accuracy will remain consistent when introduced to a large number of people. When abnormalities are detected, it doesn't mean that the abnormality is cancer, but it gives you a chance to find out before the cancer moves to a more advanced stage. The First Warning Systems states that this form of testing is non-invasive and non-radiogenic. There is nothing worse then going in for a mammogram and the doctor advising you that there is a suspicious lump and they need to do a biopsy. The first Warning System could be the next solution to breast cancer screening. The SmartPlanet.com says if additional tests are successful, this detection product could be for sale in the U.S. and Europe by the year 2014. They believe that the retail price will be $1,000.00 dollars. It is a fascinating decade that we live in and each day someone brings to light a much needed ray of hope. Stay abreast of cancer screening options, no pun intended.

Our Newsletter
Your privacy is very important to us & we take it very seriously while making sure your information stays private.