The History of the Bra 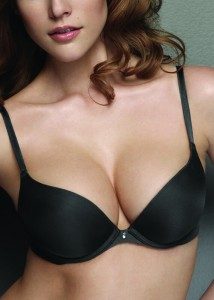 The history of the bra spans over many years and many countries. In 2500 B.C., warrior Minoan women on the Greek isle of Crete began wearing a bra-resembling garment; the purpose was to push their chests upward and expose their naked breasts from their clothing! Ohh La La. Leave it to the Greeks. Later in history the brave Greek women created and wore "the Apodesme" which was a small band of material wrapped round the breast, The device had two main functions, to prevent the breasts from growing and to keep them from moving while in motion. It was worn more commonly during everyday life in Greece. Like any good fashion find the women in Rome soon caught onto to this fabulous invention and began to wear the Greek “Adodesme”. They renamed it the “Mamillare”. This device also had multiple uses; one was to prevent the growth of the breast. The other was to conceal an ample bosom. Wow has a lot changed since ancient Roman and Greek times. Think of the main purpose of a push up bra. In France the women wore the “Bandeau” which resembled a corset made of rigid fabric that was snug around the waist. About a century later the gourgandine (hussy) or bodice is worn on top of a corset. Fast forward to 1889 France where Herminie Cadolle invented the first modern bra. It was a two-piece garment. The lower portion was a corset for the waist and the upper portion was used to support the breasts with shoulder straps. In 1905 the upper half began to sell separately as a soutien-gorge (breast support). Interesting fact, to this day Cadolle is still in the business of making brassieres.

Mary Phelps Jacob is the first American who was granted a patent for what closely looks like the modern day bra. She eventually sold her patent to the Warner Brothers Corset Company in Connecticut for a mere $1,500. Warner went on to make an estimated $15 million from the design. In 1922 the company Maidenform modified the design of the French bandeaux brassiere to enhance and support women’s breast. Maidenform still designs and sells bras today. So there you have it the evolution of the bra, not sure if any one person can be credited with the design and purpose of your brassiere. The design and innovation has seemed to change over the years as different countries took on the design.