When To Get Rid of Your Bra? 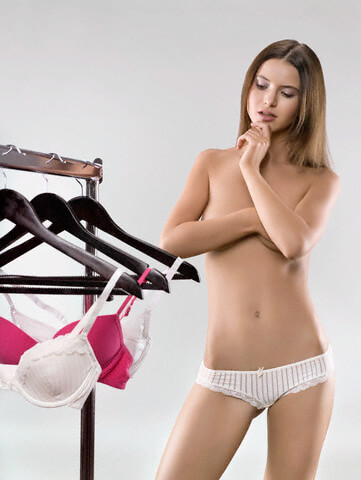 There are two situations that will drive you to the thought of finally getting rid of your bra. First, when there was "something wrong" from the beginning. The second situation, when one day you realize, that the bra doesn't look or fit the same way as it did the day you bought it. Many of us keep the wrong fitting bra for years, hoping that one day it will magically fit our body. There is nothing wrong in keeping that bra in the drawer, however many of us sacrifice and keep wearing it until the day, when the bra not only is still not comfortable, but also has traces of heavy wear off. The main concept of wearing a bra is to get the right support for your breasts. If the bra band stretches beyond your band size and is not possible to adjust the back hooks anymore, it is time to get rid of a bra. The bra band that is too loose will never give the support or lift. Also the bra straps stretch over time. When they fall off your arm, it is time to change the bra.

The bra can generally shrink if you don't take care of it properly. Washing your bra in a water that is too hot will not only change the size of the cups, but will cause yellowing of white bra band. Every time you wear a bra, it slightly looses the shape. The friction against your clothes, the body and arm movemeant, it all leaves an impact on delicate structure of your bra. Also, frequent washing and wearing your bra puts its wires at a lot of pressure. As a result the cup wires may reshape and become less effective in supporting your bust.Try to avoid machine wash as the drum will have no mercy for the bra wires! However, don't stop washing your bra. You don't want the layers of dirt and sweat accumulate on its surface. This will cause the death of your bra much much sooner. Deodorants and any other type of fragrance when not removed, will stain most of the bra fabric. Many times you will have to get rid of your bra way before it looses its shape.

The friction against your cloths will cause the bra cups to pill off, especially if they are not made of satin. Tulle will protect the cups a bit, but cotton bras are at highest risk of being damaged. The color may fade away after few months of wearing a bra. There is no real help, as using special detergents could damage the sheer fabric. Do not hang the bra in the open sun and do not wear white bra under dark colored clothes. This will prolong the life of your bra. Nobody wants a bra that will look trashy, especially if it is seen by your partner or at simple doctor's visit. In all cases - it is time to shop for a brand new bra.